Hang in there! Our Customer Care Department is down a member, so our response times may be a bit slower than usual. Rest assured, we will return all inquiries as soon as we are able.

If you or anyone you know are interested in a Customer Care position, WE ARE HIRING. Click the 'Apply Now' button to find out more. 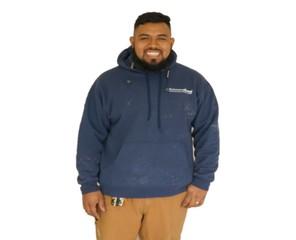 Meet Luis Arevalo-Trejo, one of our installers and crew members!! Luis is from Memphis and decided to join our team because he likes to work and get ahead! When he’s not at work you can find him spending time with his family. A few of his favorite things include working, dancing, and cooking!!

Basement to Beautiful with Dylan and Luis

Starkville, MS Sorority House in Starkville,...more »
Before and after photos from jobs I've worked on:

Tuesday, Sep 4th, 2018 Congratulations Dylan and Luis!!more »
Back to Previous Page Back to Meet The Team