Redeemers Group Case Studies: We Will Do It Right The First Time!

This case in Lakeland, TN is a great example of how no job is too big for the Redeemers Group team. The foundation failure was so extensive at this home that the brick had separated along the front of the home. The homeowner had noticed several cracks inside of the home, and the front walkway was clearly sinking.

Unfortunately for this homeowner, another foundation company had done some work 3 years ago, and the house was never actually permanently stabilized. She had also had them come out multiple times during the past 3 years to continue to try and rectify the problem.

From the street, the house appeared to be one story, however, it was a 2 story home where on 2 sides of the house, the 1st story was underground. Therefore, the greatest challenge with this home beyond the obvious foundation failure was the amount of prep-work that need to be done in order to implement an appropriate solution.

The team had to dig below the foundation around approximately half of the house. In order to reach the footing, the team needed to dig 13 feet below the surface. The team had to follow the OSHA regulations related to digging at such a depth.

As seen in the videos, much of the digging was done using machinery. The last little bit was done by hand in order to get below the foundation footing.

The videos shown allow you to see the work bring down from ground level and then from where the foundation footing is 13 feet below the surface. Keep in mind when viewing the video that is below the surface that the man shown in the hole is over 6 ft tall.

How does it work?

Once they reached the appropriate depth, heavy-duty steel brackets were installed below and against the foundation footing. Rugged, steel pier sections are hydraulically driven through the bracket to bedrock or stable soil layer.

Next, the weight of the home was transferred through the piers to competent soil below, and the lift was done to bring the home back towards its original position.

Push Piers, sometimes known as resistance piers, are made of steel and are driven deep into the soil to bedrock or other stable soil layer.

Push piers can be installed from the exterior or interior of the home and can provide an opportunity to lift the home back toward its original position, oftentimes closing cracks and improving the operation of doors and windows.

Once the homeowner and production manager were satisfied with the stabilization and amount of lift, the soil was backfilled. The result is that the home is now permanently stabilized in its new position. 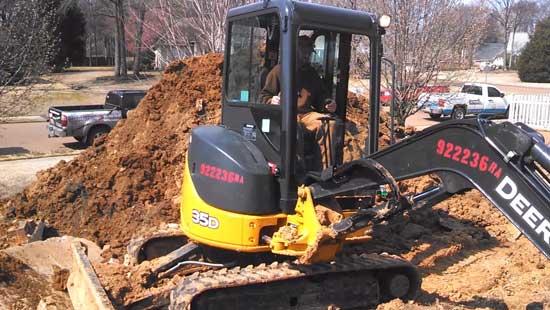 About the author
Clint Cooper grew up in Middle Tennessee and received his undergraduate degree in Agricultural Business. After graduating from Middle Tennessee State University he began work for the Boy Scouts of America as a district executive. Clint was also in the Marine Corps reserve infantry for 8 years. Afterwards, he moved his family to Memphis where he eventually started Redeemers Group, Inc. in November of 2007.

"Clint is honest, Michael is honest, and overall I was pleased to have a permanent solution to our on-going problem."
Read More
- Jim S., Germantown, TN
Back to Previous Page
Back to Case Studies