Client had several issues that needed to be addressed with this slab foundation home. As seen in the photos, client had noticed many different cracks on the brick exterior, windows separating from the brick, and the wall of the carport was bowing in. Additionally, the bushes were overgrown at the front of the house, further contributing to foundation failure. On the interior of the home, there was a hallway floor that had fallen towards the center, creating very uneven flooring.

The System Design Specialist, Wyatt Burford,  determined that steel push piers were the best solution for this home including the placement for them. Push piers, sometimes known as resistence piers, are made of steel and are driven deep into the soil to bedrock or other stable soil layer. Push piers can be installed from the exterior or interior of a home and can provide an opportunity to lift the home back towards its original position, oftentimes closing cracks and improving the operation of doors and windows.

On the exterior of the home, anything that was in the way of drilling for where the steel push piers were to go had to be removed. The overgrown bushes in the front were taken out and discarded, and the wooden walkway on the side and back of the house was temporarily removed for access. From there, the soil was removed from where it was determined the push piers needed to be driven. The team neatly jackhammered through the concrete in the carport and by the back door of the house. Heavy-duty steel brackets where then installed below and against the foundation's footing. Rugged, steel pier scetions are hydraulically driven through the bracket to bedrock or a stable soil lyer. Next, the weight of the home is transferred through the piers to competent soil below, and a lift is attempted to bring the home back towards its original position. Once the production team and the homeowner was satisfied with the stablilization or the amount of lift, the soil is backfilled and the home is permantently stabilized in its new position.

The concrete areas that were jackhammered for access were then filled in with new concrete (seen in photos-note, concrete is still wet in photos and dries to match as close as possible to original concrete).The areas with mounds of soil, including where the overgrown bushes were removed, were neatly racked to leave the area looking as neat as possible. (The goal was not to re-plant the overgrown bushes).

On the interior of the house in the problem hallway, the carpeting was removed to expose the slab (the floors are lifted from the inside.) Photo "After: hallway" shows the new (and still wet!) concrete that filled in the holes where the piers were inserted. The homeowner then proceeds with covering the slab with their own floor covering choice using a qualified flooring contractor.

Before- window separating and visible cracking

Before- overgrown bushes that are contributing to additional foundation failure

Wooden walkway that temporarily needed to be removed to access soil

Wooden walkway that temporarily needed to be removed to access soil

After: where wooden walkway was and piers were driven in.

A push pier up close. 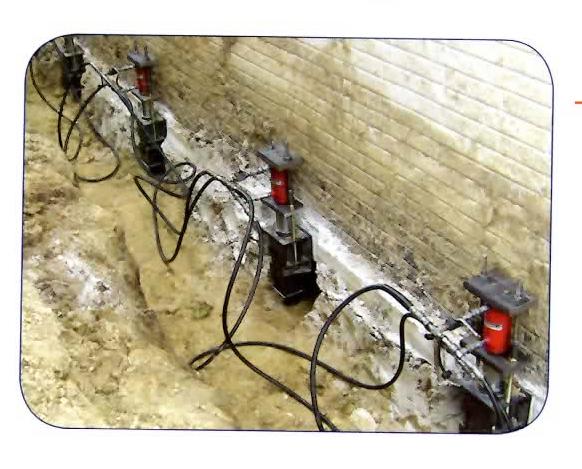 Sample photo of piers going in.

After- concrete filled back in and soil raked neatly.

After: interior hallway. Concrete filled back in.

About the author
Clint Cooper grew up in Middle Tennessee and received his undergraduate degree in Agricultural Business. After graduating from Middle Tennessee State University he began work for the Boy Scouts of America as a district executive. Clint was also in the Marine Corps reserve infantry for 8 years. Afterwards, he moved his family to Memphis where he eventually started Redeemers Group, Inc. in November of 2007.

"For 3 days they worked hard. WOW what a difference a redeemed basement makes."
Read More
- Steve D., Memphis, TN
Back to Previous Page
Back to Case Studies