Client complained of odors in the house. Upon inspection of the crawl space, System Design Specialist, Wyatt Burford, found several problems. A plastic vapor barrier had put in place in an attempt to keep moisture away from the underside of the house. Unfortunately, this approach always fails for many reasons. A few different things could be found in this space. First, as seen in the photos, mold had begun growing on the floor joists and underpinning.

Second, the seams of the plastic "vapor barrier" were allowing for soil and exposed earth to get in. You can also see from the photos that insulation had begun to fall off the underside of the house. This happens when the insulation absorbs the moisture from the earth below, and becomes too heavy to stay put.

The original plumbing had been done in cast iron, which is not an issue per say, however, over time, standing water in the crawlspace and general moisture issues had caused the cast iron to rust. Part of the plumbing was replaced with PVC because of this somewhere along the line. The cast iron isn't the problem, the moisture and water is!

The production team worked to kill the existing mold off of the joists and underpinning. (If a homeowner wants, the mold can be completely remediated and re-tested to confirm no more growth at a later date). This homeowner wanted to get rid of the existing mold, and at our recommendation, kill the source that was feeding it (the moisture). The permanent (and warranty-backed) solution was to install the CleanSpace encapsulation system which is much more than just a vapor barrier.

The steps we take in installing the CleanSpace system can be found here: https://www.redeemersgroup.com/crawl-space-repair/vapor-barrier.html and include installing airtight doors and covers, removing and standing water sources, repairing any structural damage, encapsulate and insulate the entire crawl space, and install a dehumidifier. For complete "hows" and "whys" for each of these steps, please click here: https://www.redeemersgroup.com/crawl-space-repair/vapor-barrier.html . 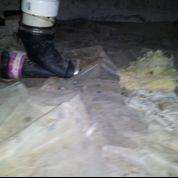 Before: plastic "vapor barrier" previously put down in crawlspace. Also showing that original cast iron plumbing was partially replaced with PVC b/c it failed over time from water damage. 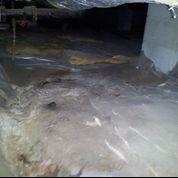 Before: Plastic "vapor barrier" previously put down in crawl space 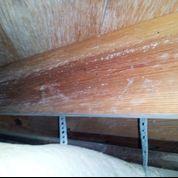 Before: Visible mold on the floor joists

About the author
Clint Cooper grew up in Middle Tennessee and received his undergraduate degree in Agricultural Business. After graduating from Middle Tennessee State University he began work for the Boy Scouts of America as a district executive. Clint was also in the Marine Corps reserve infantry for 8 years. Afterwards, he moved his family to Memphis where he eventually started Redeemers Group, Inc. in November of 2007.
Back to Previous Page
Back to Case Studies